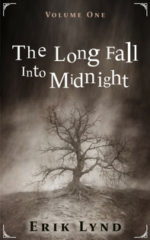 Fans of Twilight Zone, Dark Mirror, Ray Bradbury, and Stephen King will love these stories of suspense, horror, and dark fantasy from the author of ASYLUM and THE COLLECTION.

THE DYING GIRL
A dying girl with a love of the ocean. An orderly with nothing to lose and everything to gain.

THE HANGING TREE
When three boys from diverse backgrounds find a tree with a sordid history they learn that some trees have deep roots and mistakes of the past sometimes collide with mistakes of the present.

DARK ON THE WATER
A man returns to his lake home two years after the death of his wife. But something waits beyond the painful memories of the house and beneath the smooth surface of the water; something born of love, but corrupted by darkness.

SIEGE OF THE BONE CHILDREN
When a man loses everything, sometimes he retreats behind walls to keep out all the bad. He soon realizes sometimes you must leave a door for the good.

THEY EAT THEIR OWN
When an old enemy crash lands in his backyard, an ex-soldier has to choose between redemption and revenge.

IN THE PIT
Samuel is a prisoner, innocent to some, guilty to others. But his prison is different from any other. Here the dead have a habit of coming back to life, madness is just around the corner, and the only real escape is into hell itself.

DREAMS
Desire will drive a man to do many things and make many mistakes. When magic and witch’s brew are involved, however, those mistakes can have undreamed of consequences.

HIS DEVIL
A boy’s family is shaken up the night his father mysteriously abandons him and his sisters. They make a life without a father and husband until the night he returns home with a creature after him. The boy learns he must grow up quick if he is going to save his family.

BEING IT
When you’re ‘It’ in a game of tag, nobody wants to be near you. It’s all fun and games until the whole world wants to play.

PSYCHOPOMP
Del is a mortician who prides himself on his precision and compassion. But all that is tested when a corpse has one further request to make of him.

THE PLAYGROUND OF LOST CHILDREN
A detective, consumed with guilt, has a chance to stop an ancient evil and redeem a life of loss and heartache if only she can find the courage to overcome her deepest fear.