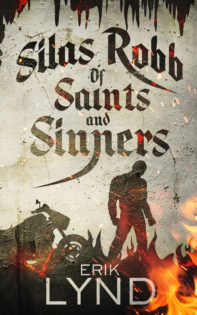 A mad sorcerer will stop at nothing to rule the world.  Even if that means destroying it.  Can a kick-ass saint and a demon that would rather be at band practice save humanity?

Silas Robb is an ancient demon summoned by the Vatican to protect humanity from the strengthening forces of the supernatural realm, known as “The Pale”. There is only one problem. Silas doesn’t particularly care for humans and prefers sex, drugs and rock and roll to saving humanity.

This time Silas’s mission sounds simple: find out what is killing or abducting the homeless and other street people of New York. But this might prove to be his biggest challenge yet because he has been assigned a partner.

She is a Saint, a being that was once human who, after being killed, never made it beyond the fringe of heaven. Together they must form an awkward partnership and track down a renegade sorcerer bent on bringing New York City to its knees.

Their mission will take them through the city that never sleeps to the depths beneath it, where a world of the supernatural and violence lays hidden from most mortals.